Formerly the State Theatre, the Forum Melbourne first opened in 1929 with the largest seating capacity of any theatre in Australia. Since then the venue has been divided into two separate venues. Downstairs, Forum I is famous for its unique architecture, large stage, mesmerising proscenium and signature cabaret style booths. Upstairs, Forum II is a smaller venue with tiered seating, small stage, surround sound and cinema size screen.

Renowned as one of Melbourne’s most unique and best live music venues, the Forum plays host to many bands, singers, comedians and popular festivals every year. When not being used for live music, the venue comes alive as an amazing function space for events such as cocktail parties, launches and fashion events.

One of the most recognised landmarks in Melbourne, the iconic Forum Theatre has an extensive history covering film, cabaret, comedy and live music.Sold in the first Melbourne land auction in 1837, the site on the corner of Flinders and Russell Streets was originally used as a private residence. Over the years, the land was regularly repurposed – an iron store, coal yards, offices and a bond store – until the turn of the century, when the Herald and Standard Newspaper Company occupied the Flinders Street building, with the State Migration Office around the corner in Russell Street. 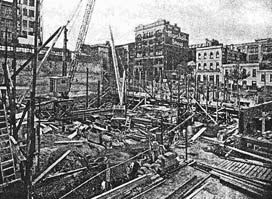 Both premises were vacated when purchased by Stuart Doyle, Managing Director of Union Theatres, to make way for the new State Theatre ‘picture palace’.

In the early 1920’s, during a visit to America, Stuart Doyle met John Eberson, who had designed a chain of ‘atmospheric’ theatres, including the famed Riviera in Chicago. Unique for their ceilings that give the illusion of sitting under a night sky, atmospheric theatres were especially popular in North America, and Eberson its main proponent.

Doyle commissioned Eberson to design three Australian theatres – the State Theatre, the Capitol Theatre in Sydney, and the Ambassador in Perth. Construction began in 1927, and was built as a mirror image of Sydney’s Capitol Theatre. The auditorium had the ambience of a Florentine garden, even featuring a copy of the Venus De Capua (the original stands in the Naples Museum), and busts of classic Greek and Roman statues such as Diana of Versailles (the original stands in the Louvre) and Discobolus (now in the Vatican). The majority of the sculptures were cast directly from the originals. To encourage the theatre’s image of a heavenly garden, fresh flowers were placed around the auditorium, to fragrantly complete the picture.

Throughout the entire auditorium, the cerulean blue ceiling – imitating the Mediterranean sky – gave the feeling of being seated under an open evening sky, complete with twinkling stars and projected clouds floating past.

Union Theatres competed with Hoyts’ Regent Theatre in Collins Street to be the first to open an extravagant picture palace. The State won the race after seven months’ construction time and opened on 23 February 1929, three weeks ahead of the Regent. A fabulous creation of fantasy both inside and out, it is also one of only a few atmospheric theatres built outside North America.

Opening night was nothing less than spectacular, and presented the silent films The Fleet’s In starring Miss Clara Bow, and The Cameraman starring Buster Keaton. The first ‘talkie’ was The Doctor's Secret, premiering on 6 April 1929. By 1938, the longer theatre hours allowed a feature movie, with an orchestral presentation and a Tivoli stage act.

The State Theatre quickly became a Melbourne landmark. Its iconic copper-domed clock tower rose 49 meters from the street, and was immediately noticed by commuters exiting Flinders Street Station. The grand façade featured a replica minaret of one standing on a Cairo mosque alongside smaller minarets with ornate windows. Together with pressed cement walls, lace-like balustrading, slender columns, receding balconies and towers all painted in bright, bold colours and lit with twinkling lights, the Forum was an imposing, magnificent Melbourne monument.

The grandness of the theatre was immediately apparent as soon as audiences entered the foyer. Patrons’ attention was immediately drawn to the illuminated clock in the centre of the floor, synchronised to the clock tower. Audiences in the 1,372 seat Dress Circle entered through rotundas on either side, while audiences in the 1,999 seat Stalls were overwhelmed by the vast night sky, complete with accurately placed constellations. At 3,371 seats, the Forum featured the largest seating capacity in the southern hemisphere. By the early 60’s, television had made serious cuts to theatre attendance, so Greater Union decided to convert the State Theatre into two smaller theatres. The walls were brought in, reducing the seating area, and wall decorations were repositioned. The Dress Circle and Stalls were then split into two theatres – the Forum downstairs, and the upstairs Rapallo, for which a new stage was built.

The Forum opened in 1962, and the Rapallo opened in 1963. In November 1978, the building was added to the Historic Buildings Register and came under the protection of the National Trust. In 1981, both theatres were extensively refurbished and opened as Forum I and Forum II.

In November 1986, the Forum complex was purchased by the Melbourne Revival Centre and used as their meeting place for almost ten years. In 1996, David Marriner bought the complex, converting the Forum into one of Melbourne’s premier live music and cabaret venues, with comedians, magicians, dancers and live bands performing under the cerulean sky. Forum II is a 500 seat theatre-style auditorium used for film screenings and smaller-scale live performances.

The Forum continues to bring pleasure to many patrons, both young and old, and is proof positive that beauty and originality are timeless, and that this unique building will continue to light up the eyes of an appreciative public for many years to come.